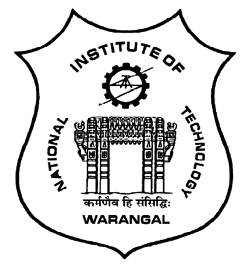 The National Institute of Technology, Warangal (abbreviated NIT WARANGAL or NITW) is a public engineering institution located in Warangal, India. It is recognised as an Institute of National Importance by the Government of India. Foundation stone for this institute was laid by then Prime Minister Jawaharlal Nehru on October 10, 1959, the first in the chain of 30 NITs (formerly known as RECs) in the country. The institute was renamed as the National Institute of Technology, Warangal in September 2002.

The Regional Engineering College, Warangal was the first to be established (in 1959) among the chain of 15 Regional Engineering Colleges in the country. The approval of the Government of India to establish one of the R.E.C 's meant for the southern region of Warangal was conveyed to the State Government through its letter no .F 11- 5/ 58- T. 5 dated 30 January 1959. The Government of Andhra Pradesh through G. O. Ms. No. 2440 ( Education Department ) dated 15 July 1959 constituted the first board of Governors of the Regional Engineering College, Warangal appointing Dr. D.S. Reddy( the then Vice Chancellor of Osmania University ) as the chairman. The foundation stone for the college was laid by Pandit Jawaharlal Nehru on 10 October 1959 in Kazipet. The classes for the first batch of students in Civil, Electrical and Mechanical Engineering branches commenced on 12 September 1959 in temporary sheds erected in Balasamudram area of Hanamkonda. Later temporary sheds were also erected in Industrial Colony of Warangal for conducting lecture classes. Laboratory classes and workshop classes were conducted in the Government Polytechnic, Warangal in the initial stages. The conduction of classes on the premises of the permanent site in Kazipet commenced in January 1963.