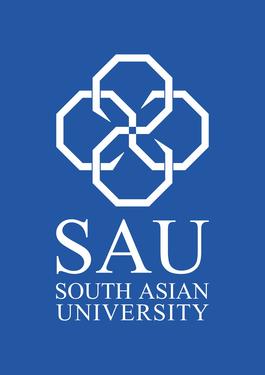 Master of Science in Biotecnology
Master of Mathematics

The idea of establishing a South Asian University (SAU) was mooted by the Prime Minister of India at the 13th SAARC Summit in Dhaka in 2005. The idea was for member countries to pool their resources for creation of a Centre of Excellence in the form of a University that would provide world-class facilities and professional faculty to students and researchers drawn from every country of the SAARC region.

Prof. Gowher Rizvi, the well-known historian, scholar and academic from Bangladesh was entrusted with the task of preparing a Concept Paper for SAU. Prepared after a series of consultations across the SAARC countries, the Concept Paper was submitted to the SAARC Governments to elicit their views. The idea of a South Asian University found favor in all SAARC Member States and an inter-ministerial Agreement for Establishment of South Asian University was signed on 04 April 2007, during the 14th SAARC Summit in New Delhi.

The Government of India established a Project Office of the SAU in the year 2008, of which Prof. GK Chadha, a former Vice Chancellor of the Jawaharlal Nehru University, New Delhi, was appointed the Chief Executive Officer. A SAARC Steering Committee comprising members from all SAARC countries was constituted to oversee the establishment of SAU. Various Inter-Governmental Task Forces were also constituted and entrusted the job of framing the Rules and Regulations to govern the University as also the Academic Structure and the Business Plan for the proposed University. All University documents prepared jointly by the SAU Task Forces were submitted to SAARC Secretariat and were approved in the 16th SAARC Summit held in Thimphu in 2010. The SAU Project Office was wound up and the South Asian University opened its door to students in August 2010. Currently, the University offers doctoral and master's programs in seven areas: Applied Mathematics, Biotechnology, Computer Science, Development Economics, International Relations, Law and Sociology.

The then Indian External Affairs Minister, Pranab Mukherjee, laid the foundation stone of the SAU campus at a 100-acre plot in Maidan Garhi, Mehrauli in South Delhi on 26 May 2008. The job of preparing the architectural design of the campus and building on the campus was entrusted to a Nepalese architecture firm selected through a tough Regional competition. Campus designs have been finalized and various required clearances and approvals have been obtained. The campus construction is due to start in 2014. The capital cost of establishing the SAU is being provided by the Indian government, while all SAARC member countries share the operational costs in proportions that are mutually agreed upon. Later, the University would also raise money from international financial institutions, educational foundations and donors.

A temporary campus of the University was initially set up in few buildings provided gratis by the Jawaharlal Nehru University. The campus was subsequently relocated in 2011 to Akbar Bhawan, Chanakyapuri in south Delhi. University expects to shift to its own residential campus by the year 2016-17.