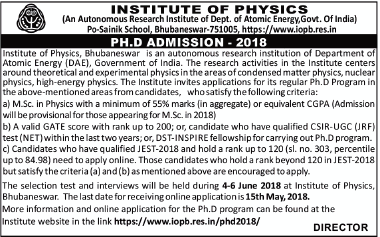 The Institute Of Physics, Bhubaneswar is an autonomous research institution funded jointly by the Department Of Atomic Energy (DAE) and the Government of Odisha. The Institute was officially established in 1972 by the Government of Orissa, and registered in 1972 as a registered society under societies Registration Act 1860. The Institute started functioning under the directorship of Prof. T. Pradhan on September 4, 1974 in two rented rooms of the Utkal University Guest House. After a few months, the Institute moved to a rented house in Sahid Nagar, Bhubaneswar, where its academic activities got started in January 1975 with two faculty besides the then Director, Prof. T. Pradhan. From 1974 to 1981, the Institute functioned in rented buildings and moved to its present campus in 1981. On March 25,1985, the Institute was taken up by the Department of Atomic Energy.

The predoctoral programme is aimed at imparting a broad based education in advanced physics and reserach methodology. It is also planned that it will help a student not only in his/her doctoral reserach, but also enable him/her to become a good physics teacher irrespective of whether or not he/she takes up doctoral reserach. Students are selected for admission to the Pre-doctoral programme on the basis of performance in both the written JEST and oral test. The written test is common entrance test JEST for many Institutes in India.The students for the oral test are selected from the performance in JEST.The course runs from August to June every year leading to a Diploma in Advanced Physics awarded by the Institute.

On completion of the Pre-doctoral programme the students are eligible to join for research under the supervisoin of faculty members of the Institute leading to the Ph.D. degree awarded by one of the three universities in Orissa. In order to encourage local college and university teachers, including the Institute alumni to carry out research work, the Institute supports a short-term visitors programme during summerand other vacation periods. All vistors are provided with financial support in terms of travelling as well as daily allowances.

Institute of Physics, Bhubaneswar is an autonomous research institution funded by the Department of Atomic Energy (DAE), Government of India. The research activities in the Institute spans theoretical and experimental research in the areas of condensed matter physics, nuclear physics, high energy physics and interdisciplinary areas such as quantum computation, biological physics, complex systems, nano-science, material science, etc. With its distinguished research faculties and worldclass facilities, Institute of Physics offers an ideal platform to motivated and aspiring students to initiate their research career.

One of the important objectives of the Institute is to train and guide young scholars for research and career in physics. For this, the Institute conducts regular Ph.D program, where the degree is awarded by Homi Bhabha National Institute (HBNI), a deemed-to-be University within the Department of Atomic Energy. During the first two years of the Ph.D program (which includes the period of course work), scholars are paid a fellowship of ₹ 25,000/- p.m. Thereafter, scholars are placed in Senior Research Fellowship (SRF) grade and are paid ₹ 28,000/- p.m. In addition, there is an annual contingency grant of ₹ 32,000/- to meet expenses on books and other research related expenses including academic travel. The HBNI also supports the scholars for participating in an International conference once during the doctoral programme. On campus hostel accommodation is normally provided to all scholars. Medical facilities are also available to them.

The Institute invites application for its regular Doctoral Programme starting from August, 2018. Indian nationals satisfying the following criteria are eligible to apply:

(Candidates are required to upload the supporting documents regarding GATE/ NET/ DST-INSPIRE and produce the same in original at the time of selection.)
If a candidate has a rank beyond 120 (Sl. No.: 303, Percentile: 84.98) in JEST-2018 but satisfies the criteria mentioned above, she/he is encouraged to apply.

Eligible candidates are required to appear for a written test at around 9 AM in the morning of 4 June, 2018 at IOP, Bhubaneswar. Those shortlisted on the basis of the performance in the written test will appear for a personal interview during 4-6 June, 2018. The final selection will be based on the performance in the test and the personal interview.

Candidates appearing for the written test will be reimbursed sleeper class round trip train fare between their place of residence and Bhubaneswar. A sum of ₹ 600/- will be provided to meet living expenses