The Akhil Bhartiya Vidyarthi Parishad (ABVP) stamped its authority in the DUSU elections by winning three out of four significant posts. The results, which were declared on Thursday, saw ABVP candidates Ankiv Basoya, Shakti Singh and Jyoti Choudhary bagging the posts of president, vice-president and joint secretary respectively. The post of secretary went to NSUI candidate Akash Choudhary.

The counting day was mired in controversies as some contesting outfits complained about EVM tampering after six rounds of counting. The counting, which began at 8 AM, was suspended briefly after members of NSUI and CYSS complained about EVM malfunctioning in some stations. The NSUI demanded fresh elections on ballot paper or VVPAT, while ABVP pressed to resume the counting, terming NSUI’s allegations as unfounded. The counting resumed after the contesting parties mutually agreed to take the process forward. 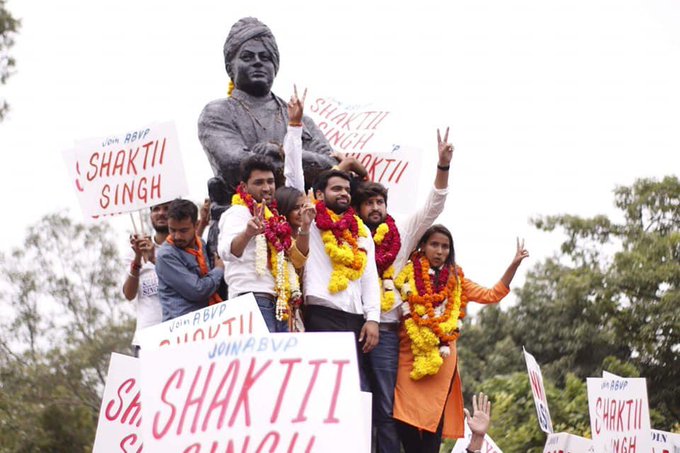 Over a lakh students voted in the election this year, which saw a turnout of 44.46 per cent. There were 23 candidates in the fray.

The elections were conducted under tight security. Around 11 members of different parties, who were seen canvassing, were warned by the patrolling police personnel. Security was also put in place outside Zakir Hussain (Evening) College, which had witnessed violence on Monday after the members of the ABVP allegedly damaged college property and also assaulted some faculty members and students.